The Incidence of Venous Thromboembolism in Dengue Viral Infections: A Systematic Review

BACKGROUND
Dengue infection has become a major public health problem with significant socioeconomic burden to the increasing geographical extension, number of cases, and severity of the disease. One of the neglected complications in dengue is venous thromboembolism (VTE) which could also be as fatal is often overlooked in the overall management of dengue.

OBJECTIVE
This study aimed to provide a perspective on the incidence of thromboembolism in patients with dengue infection.

METHODS
The search strategy was conducted through PubMed and LinkSpringer. About 182 articles were retrieved using ‘vein thrombosis’ and ‘dengue’ keywords. Further, screening was carried out and resulted in 15 articles. In the end, five articles were included. To be eligible, the articles should be published from 2011-2121 and published in English.

RESULTS
This review found that VTE can occur in dengue patients of all ages, genders, and severities. VTE is more common in dengue shock syndrome patient rather than dengue haemorrhagic fever or least likely in dengue fever. Administering Anticoagulants is still the preferred option in managing VTE in dengue patients with caution of the thrombocyte count of patients.

CONCLUSIONS
The likeliness of VTE occurrence is linear with the severity of the dengue infection and the patient’s length of stay in hospitals. Preventive measures could be taken to prevent VTE in high-risk dengue patients, thus it is important to do risk scoring in high-risk patients. Thrombocytopenia must be taken into account when realizing said preventive measure, i.e., administering anticoagulant as prophylaxis.

Dengue is a viral disease that spreads by arthropod and is caused by four serotypes of dengue virus (DENV 1-4). The arthropod responsible for transmitting the virus is Aedes mosquitoes. Dengue itself has become to a major public health problem with significant social and economic burden to the increasing geographical extension, number of cases, and severity of the disease.1

Recent estimates made in 2013 cite that 390 million have dengue virus infection with annual cases as much as 96 million worldwide which is three times more than the World Health Organization (WHO) expected in 2012.1 Dengue also has an increasing number of mortality reaching 38,000 deaths in 2016. Currently, dengue is endemic in more than 100 countries, mostly in developing countries, like South East Asia, such as Indonesia. The average number of dengue cases annually in Indonesia was more than 129,000 in 2004-2010, which is the second highest incidence rate in the world after Brazil. This is due to the fact that primary and secondary vectors for transmission the Ae. aegypti and Ae. albopictus, respectively are endemics in most of Indonesia’s region.2

The illness spectrum of dengue may range from asymptomatic disease to wide range of syndrome with severe manifestation.3 For the symptomatic manifestation, it ranges from mild debilitating Dengue Fever (DF) to life threatening Dengue Hemorrhagic Fever (DHF) and Dengue Shock Syndrome (DSS) due to plasma leakage in dengue patients which become the main concern in dengue infection.4

DF itself is a self-limiting fever, lasting usually for 5-7 days with clinical features that vary according to age. It usually manifests as undifferentiated febrile illness with maculopapular rash in infants and young children whereas in older children and adults may have mild febrile syndrome or severe disease with high fever. It is usual in DF to have bleeding complication such as gingival bleeding, epistaxis, gastrointestinal bleeding, haematuria, and menorrhagia.3

DHF and DSS is characterized by symptoms of DF with thrombocytopenia, haemorrhagic manifestation, and plasma leakage. Fine petechiae usually seen in febrile period and at the end of febrile illness the critical begins, marked by rapid decrease in temperature and circulatory disturbance, e.g., plasma leakage, haemoconcentration and thrombocytopenia. In severe cases, DSS ensues and is characterized by a rapid, weak pulse with narrowing pulse pressure, cold clammy skin, and restlessness. Patients may die within 12-24 hours of going into shock or recover rapidly with volume replacement therapy making its fatalities a huge and main concern of dengue. Main concern in dengue infection has been the severe form of the disease, which are dengue haemorrhagic fever (DHF) and dengue shock syndrome (DSS) which could cause fatalities due to the occurring hemorrhagic manifestation of the disease.3 Other uncommon complication like thromboembolism events, such as deep vein thrombosis (DVT) or other veins thromboembolism that could leads pulmonary thromboembolism (PTE) or even ischemic stroke which could also be as fatal is often overlooked in the overall management of dengue.4

This study was a literature review with a narrative review approach, and it aimed to provide a perspective on the incidence of thromboembolism in dengue. The first step taken was identifying clinical information related to renal trauma using the PICO method (P = patient, population, problem; I = intervention, prognostic factor, exposure; C = comparison, control; and O = outcome) method. In this study, ‘P’ was patient with dengue infection, ‘I’ was the characteristic of the patient and manifestation of disease (age, gender, severity of dengue, and ‘O’ was the incidence of vein thromboembolism Meanwhile, the author did not specify any phrase for ‘C’ in the PICO method.

In the final step, the authors screened the article manually by looking at the title and abstract of the article obtained from PubMed and LinkSpringer. After the manual screening process, in the end, five articles were found that deserve to be analysed and discussed in this literature study. The overall article screening process was displayed in figure 1. 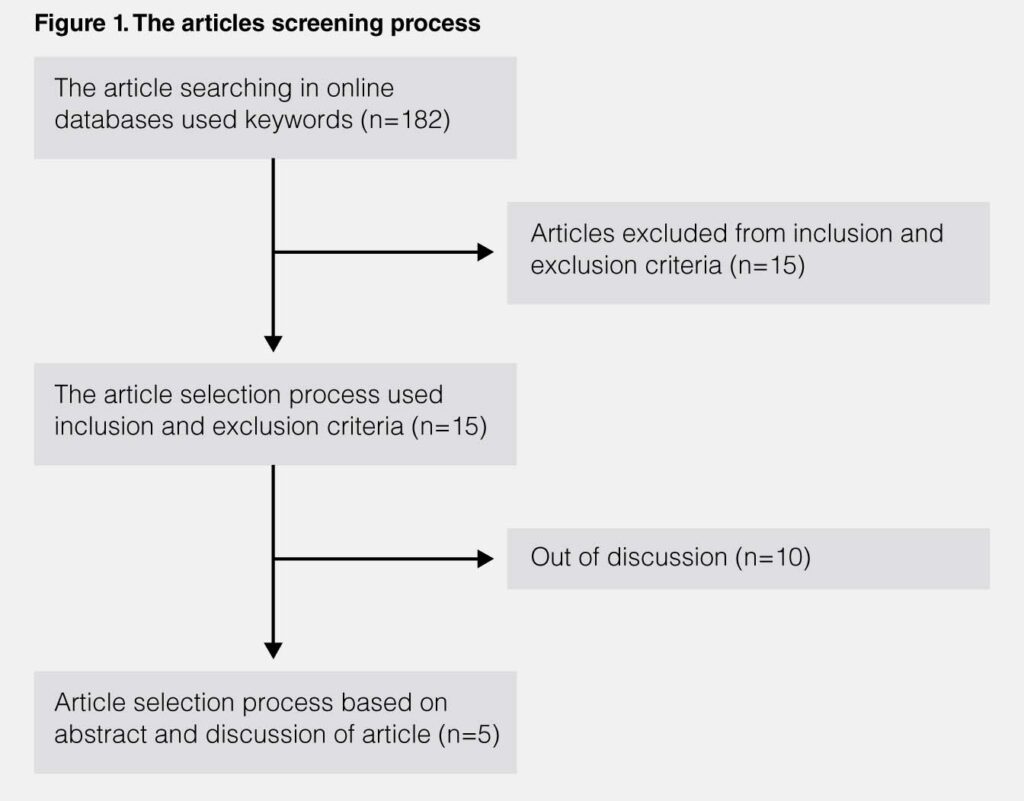 This literature study compares the similarities between case-reports included in Table 1. This literature study found that patient with dengue infection of all ages ranging from 2 children (40%) and 3 adults (60%) consist of 3 were male (60%) and 2 were female (40%) can developed vein thrombosis with varying sites, 4 (80%) manifested as DVT of the leg and 1 (20%) as portal vein thrombosis (PVT). The median age in this study was 37 years. The severity of dengue infection in this study varied from DF in 1 (20%) patient, DHF in 1 (20%) patient, DSS in 2 (40%) patients, and 1(20%) was unclear. It also happened that in this literature study all the ethnicities of patients are Asian, notably South Asian.

It was also noted that all the patients came with different chief complaints 4 out of 5 (80%) came with fever and 1 (20%) patient only experienced unspecific nausea, vomiting, and diarrhoea with mild-to-moderate dehydration. 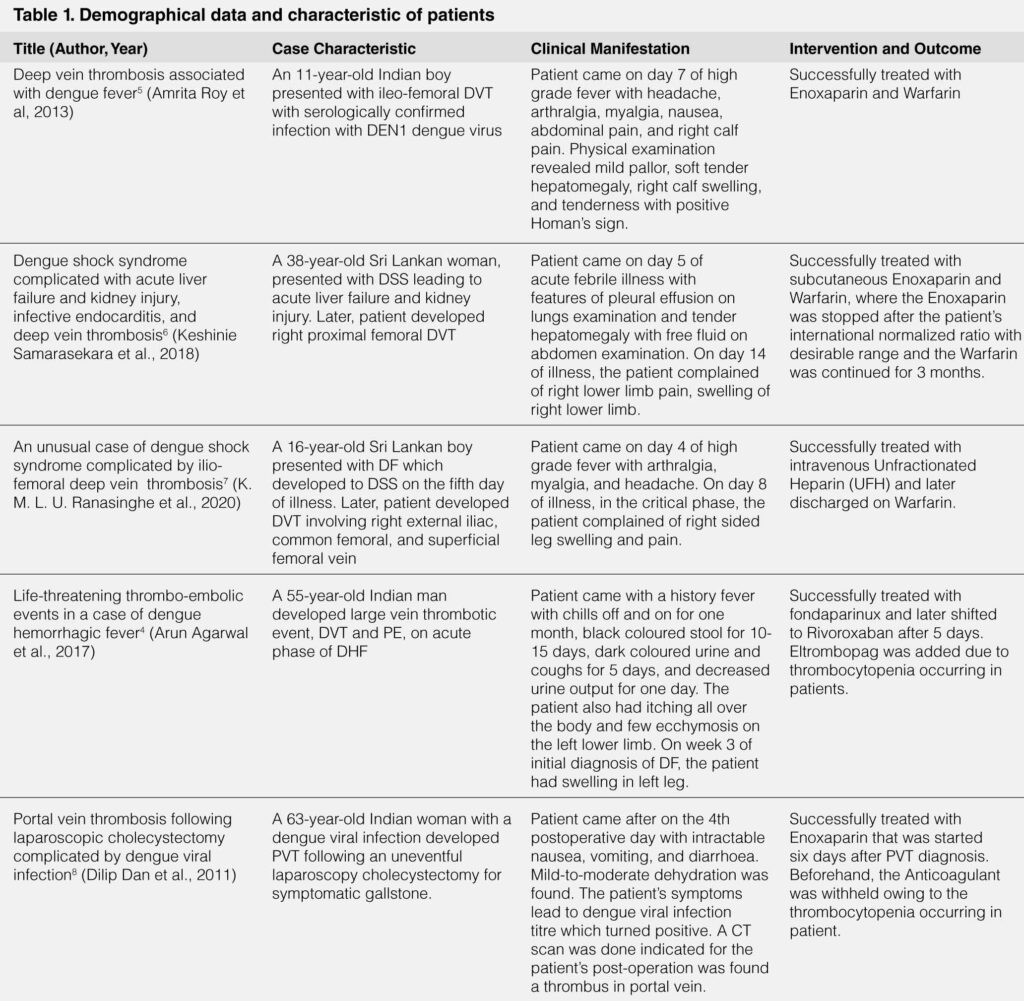 This study indicates that there are varied trends regarding the demographical data of venous thromboembolism (VTE) incidence in dengue patients. VTE in dengue patients occurs in varied ages from child to elderly and all genders. The only thing that is not varied is the geographical data where all the patients happen to be from South Asia, i.e., India and Sri Lanka. This is not exactly surprising considering the fact that dengue is endemic to that area.7

VTE in dengue can be described in several mechanisms. Dengue virus interferes with components of anti clotting pathway where it downregulates thrombomodulin-thrombin-protein C complex formatting, thus reducing activated protein C. These condition, low concentration of plasma anticoagulant proteins C and S and antithrombin III, may be related to the severity of shock in dengue with the occurrence of capillary leakage. In this study it was found, VTE can occur in all severity of dengue from DF to DSS, though it is more common to be found in DSS. Prolonged shock in DSS can trigger and accelerate the development of disseminated intravascular coagulation (DIC) and formation of microthrombus. This may be so, but it has not been associated with large vessel thrombus. So, it may seem the more severe the dengue infection the higher the risk of VTE occurs. Dengue virus also activates endothelial cells and increases the expression of thrombomodulin.6, 7

The incidence of VTE can be hypothesised to be higher the longer the infection occurs where it was found in this study that most VTE occurs after 7 days of onset of fever where the patients are not exactly in acute phase anymore. This may be related to the inactivity of patients which is the consequence of illness. If a patient with dengue hospitalized, it could be suggested to do a scoring for VTE in high risk patient so that could be give low and fixed preventive dose of Anticoagulant drugs such as Low Molecular Weight Heparin (LMWH), UFH, or Fondaparinux.9 Multiple scoring systems can be chosen to determine the risk of developing VTE in high risk dengue patient. Other risk factors of thromboembolism should be considered into account in determining the risk of developing VTE. Said risk factors is described in Table 2.10 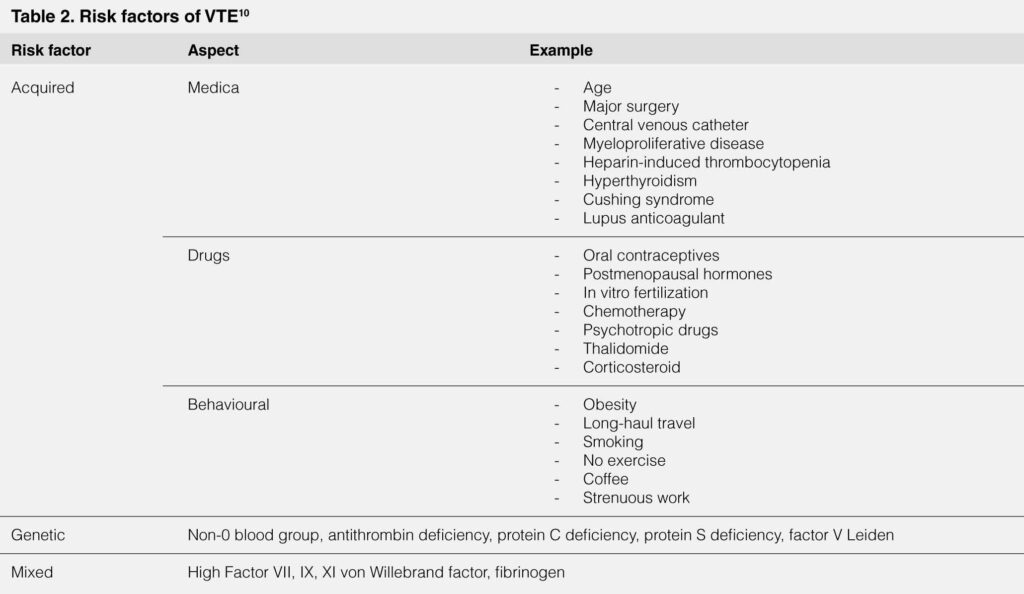 Administration of Anticoagulants is still the preferred treatment in managing VTE in dengue patients, though the thrombocytes count must be taken as a consideration before administering Anticoagulant. In dengue infection where thrombocytopenia is one of the clinical features, a choice must be made whether to withhold the Anticoagulants until thrombocytes in preferred levels or to give the Anticoagulants with addition of thrombopoietin receptor agonist drugs, such as Eltrombopag. This safety net should be considered due to the fact of the dilemmas of treating a blood clot in a patient who is at risk for excessive bleeding.5

Awareness of thrombotic events, like VTE, is recommended to all practitioner who treat dengue in hospital settings, especially in area where dengue is endemic, and with prolonged stay in hospitals due to the illness i.e., Indonesia.5

ACKNOWLEDGEMENT
None. No funding to declare.